Stopped at Petroglyph Point, a cliff filled with drawings. Some have been defaced but a chain link fence since the 30's has protected things pretty good.

A great big owl landed nearby. Didn't have the right lens handy but think I may have gotten a credible "tourist" picture.

Saw some ducks and pelicans on Tule Lake in the Tule Lake Wildlife Refuge. 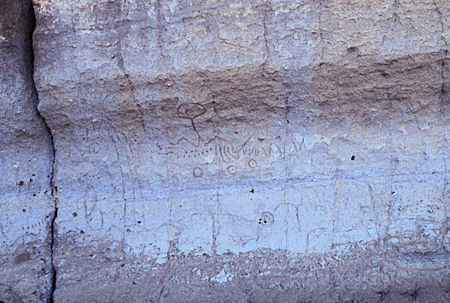 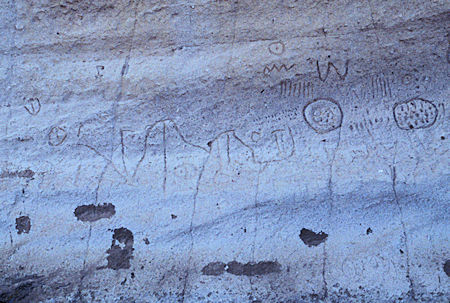 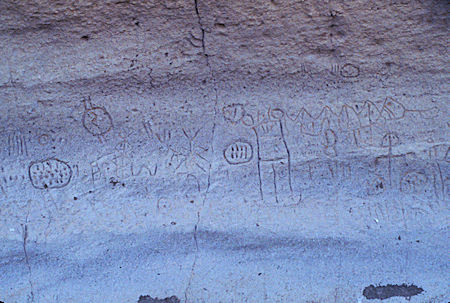 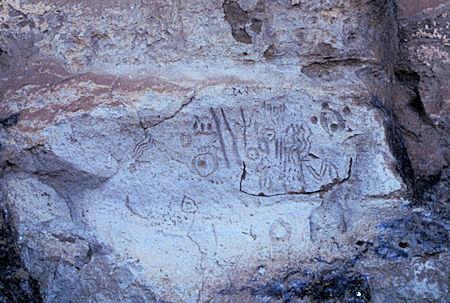 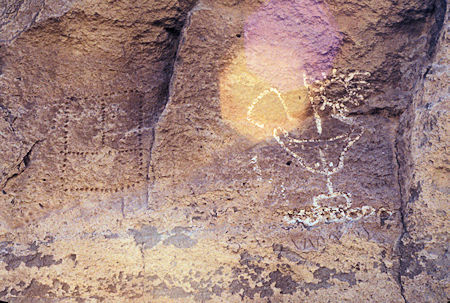 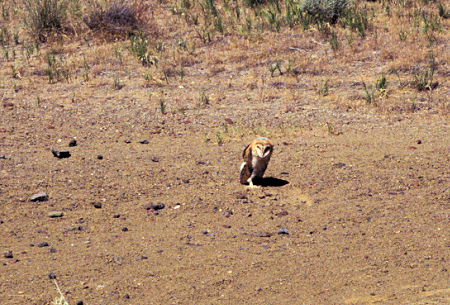 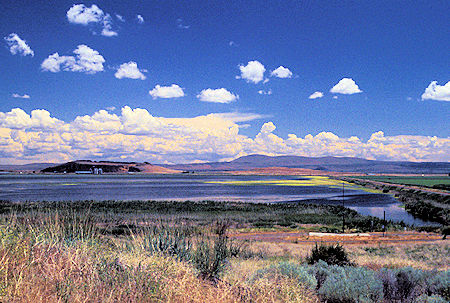 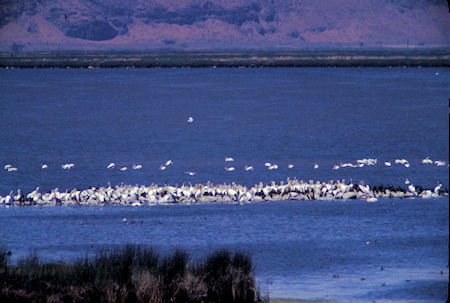 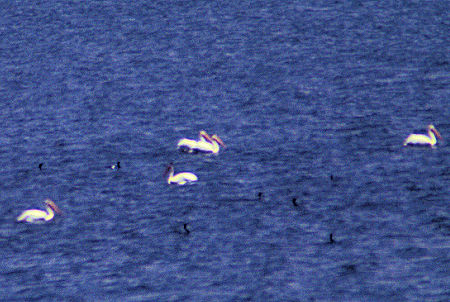 Took a short walk around a lava battlefield area where a local Madoc Indian Chief named Captain Jack had a stronghold and trounced the Army soldiers trying to put he and his followers back on the reservation.

Spent the night at the monument campground, then returned to the north part of the monument to work my way south. Saw marker where General Canby was killed by the Indian party while negotiating a deal. Indians didn't like any of the arrangements. 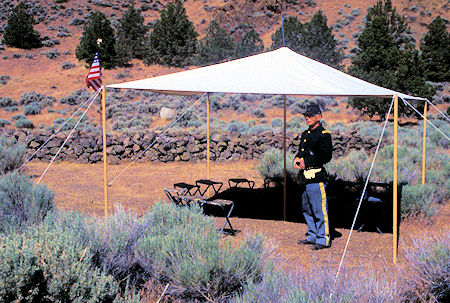 Nearby Gillems Camp had been an Army Camp at the time. The camp had been near the Tule Lake shore in those days, but the shore is now over two miles away with the draining and developing for irrigation that has occurred.

An old gentlemen in full dress Army uniform was encamped under a tarp at the camp to fill your head with five minutes or an hour of history about the rather messy and unnecessary war.

He is the father of the monument Interpreter and lives in Klamath Falls after moving there from Tucson several years ago.

Took the two+ miles round trip hike past Black Crater to the Thomas-Wright Battlefield overlook. Seems Captain Jack had his Indians dug in on the volcanic high spots overlooking a lower plain.

The Army had stopped for lunch after a four mile trek from Gillem's Camp in search of an artillery position. As they started walking up to a couple of nearby high points, the occupying Indians attacked.

Many soldiers ran back toward camp, others were killed in the battle. At one point, one of the Indian Chiefs is said to have called out to the soldiers remaining, to go home, the Indians didn't want to kill them all in one day.

Met a Grant's Pass Boy Scout Troop doing annual trail work on this trail which they had adopted.

The weather was very nice - cool breeze - lots of wild flowers. Unfortunately much of the lava scenery wasn't very photographic.

Next stop was Fleener Chimneys, at the head of one of the major lava flows in the area. These chimneys were apparently built up in a way some what similar to the Tufa Towers at Mono Lake. Gas vents tossed lava up in the air where it solidified and splattered down around the vent, building up the solid material around the venting gas. Deepest hole is 50 feet. 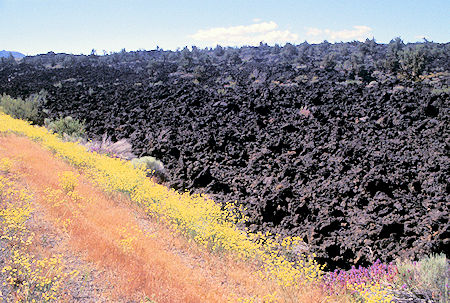 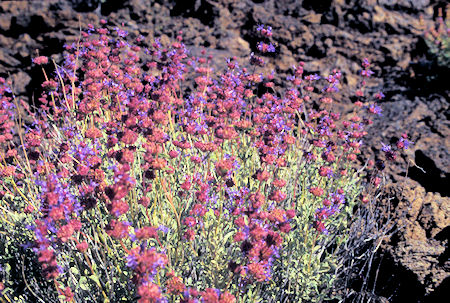 Next stop, Balcony and Boulevard Caves. All the caves in the park are basically lava tubes. The area is full of these tubes below the surface. Some have collapsed. The entry into "caves" is generally at a point of collapse. The insides are quite large - easy upright walking most of the time although a hard hat is handy to have. Some are like 50 feet high.

Unfortunately the caves are sort of monotonous as they are all very "same-same" and have nothing spectacular like limestone caves. 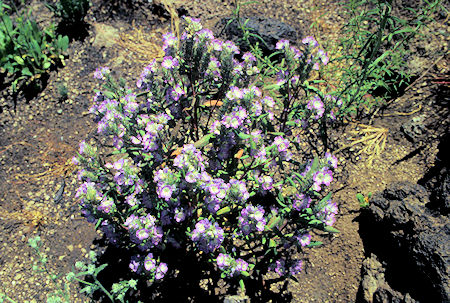 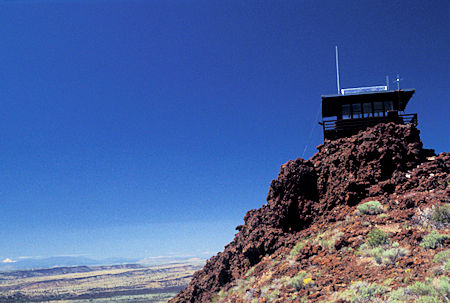 Next was the 3/4 mile walk up a steep trail to Schonchin Butte Fire Lookout which gives you great views of the entire area. It is still in use but only manned during high fire season. Outstanding view of the east side of Mt. Shasta. Looked like a big white ice cream cone. 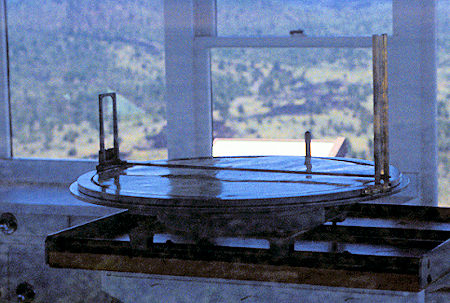 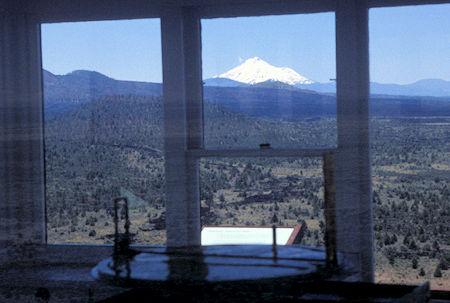 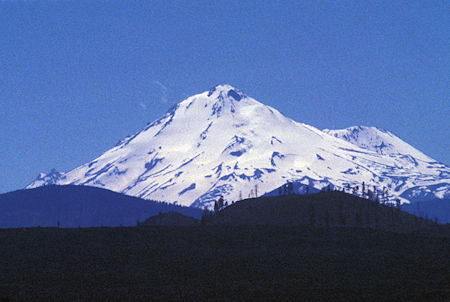 Next was Merrill Ice Cave. The ice caves are caused when parts of tubes collapse to create a cavity that has only an upper opening which means there is no significant air flow. The cavity then becomes cold enough to generate and maintain ice. This cave is two layers and has a series of ladders and ramps that take you deep into the icy cavity. Could see my breath.

Next was Skull Ice Cave, so named when a bunch of goat, sheep and other skulls were found dumped in it. Also a couple of human skulls. No explanation was ever determined. As I started into this cave the bulb in my battle lantern died so I went back to get two other regular flash lights I had in the car. One of them was very feeble and the other one sort of cranky. Any way, headed into the cave, along with a bunch of other people.

Down a fair distance into the walk way was covered with several inches of icy water and the people coming back said it was slippery. My light wasn't doing much good so I decided to retreat. The bulb in that one then quit. Fortunately I had the other party to go with (and there were others back in the cave).

I decided to go to the Visitor Center to see if they sold bulbs. They didn't but they did loan out free battle lanterns. Trouble was, it was ten minutes until five and return time was five thirty, and I still had a bunch of caves to see on the main loop near the Visitor Center. So I charged off "carefully" to see how much I could cover.

Skipped past a few and stopped at the Catacombs which turns out to be a large series of tubes covering quite a bit of distance. As mentioned above, sort of same-same-same. After seeing enough of that I managed to check two others, then decided there was nothing special to see so why fight it, returned to Visitor Center and turned in the lights.

Oh, because I was alone, they had "made" me take two lights, in case one of them quit.

Explore the Lava Beds National Monument at this site for more pictures and information.

Drove out of the Monument toward Medicine Lake and camped at the Modoc National Forest Campground at Payne Springs (where I had backed into the tree) - stayed well away from that tree.