Beautiful sunny day. Drove further up the Boulder River through pretty forest and many meadows with flowers. Rugged mountains. This is a looooong valley with a number of church camps and private ranches. Numerous trailheads. Lots of fisherman.

Headed back toward Big Timber and stopped along the way at Natural Bridge and Falls.

I had stopped when driving in but it was cloudy so didn't take pictures.

It was a Montana State Park when I visited it. As of July 2004 it was being transferred to the Forest Service in a land swap. 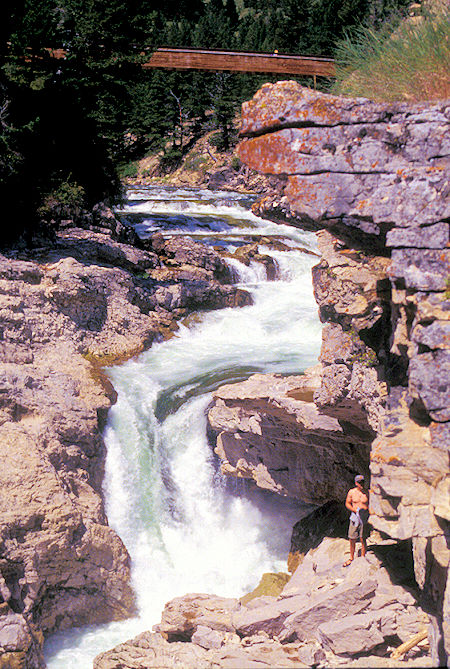 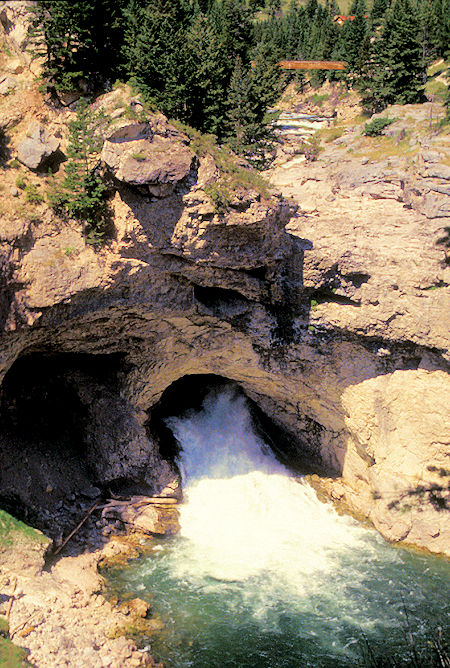 The Boulder River, when water flow is low, goes through a tunnel in the rock and then drops over a small falls (which is what it was doing now).

When water flow is high, the river also flows over the top above the tunnel and drops down a 100' falls.

Back at I 90 and Big Timber I headed east to Columbus, Montana, then south on MT 78 and MT 419 and West Rosebud Road to Emerald Lake campground Custer National Forest.

This is in the Beartooth part of the Absaroka-Beartooth Wilderness.

Drove to the nearby Mystic Lake trailhead but I was a little under the weather so didn't take a hike. Backtracked to MT 78, then south to Roscoe, MT, then on East Rosebud Road to East Rosebud Lake campground, Custer National Forest. 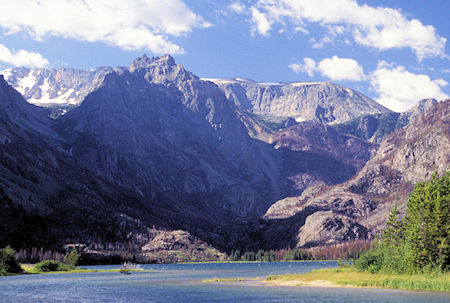 This was an interesting drive into a rugged and scenic valley with some snow on the peaks.

A vast part of this area had been burned recently - more recent than the Yellowstone fire I think.

It also has an area of many Ranchettes with quite a few pretty large and expensive looking houses.

The road was also interesting. It started out paved, then turned to dirt. In the area of the Ranchettes it was POTHOLE CITY - almost the worst road I'd been on the entire trip - and surprising considering the money evidenced by the homes.

At the Forest Service boundary it became paved two lane for a number of miles and then turned to rocky gravel (but no potholes).

At the end is a private community called Alpine with a number of homes on small lots similar to Sunny Slopes. Sign said it had been private land since 1894.

Some new houses were going up - may have been replacements for ones lost in the fire. Fortunately the houses are surrounded mostly by a large meadow so all were not destroyed by the fire.

The campground is in the trees but they managed to save it - the fire burned right up to the edge of the campground. Very pretty area.

It rained - thundered and lightning - yesterday evening but was nice and sunny in the morning.

Backtracked to MT 78 and then south to Red Lodge, Montana where I gassed up and resupplied.

Downtown has many old brick buildings while the surrounding area has many modern houses in subdivisions and ranchettes.

Another beautiful area working on destroying itself.

Headed south and west on US 212, the Beartooth Highway which goes over 10,947' Beartooth Pass.

This road is not kept open in the winter but is an EXTREMELY SCENIC drive that you should try to take if you are in the area. 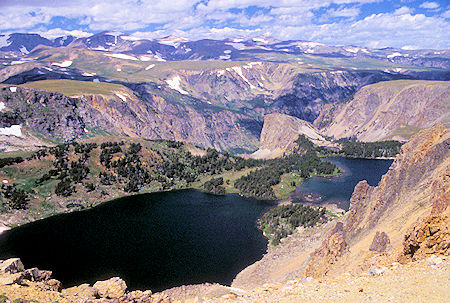 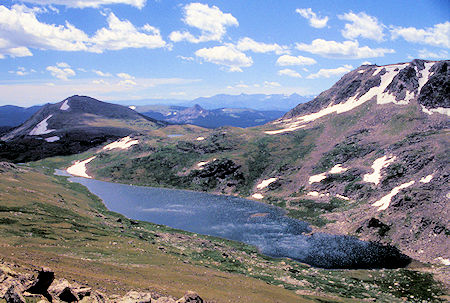 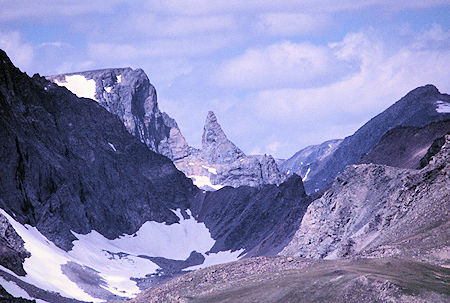 The heavy winter, late spring and more than usual summer rains (per a local) have kept everything green and many flowers were evident. The Montana section of the highway is very good and recently upgraded. Stopped at numerous viewpoints including a developed one at 9,190'. Views of the Beartooth range - Beartooth plateau - probably saw Granite Peak 12,799' highest in Montana.

Still quite a bit of snow around and the country is much like the rugged parts of the Sierra. Lots of jagged peaks and alpine lakes including a quite obvious Beartooth Peak. Up on top it was typical alpine country with a brisk wind.

The Wyoming part of the road is narrow and not in the greatest of shape but the lakes, meadows, mountains were outstanding.

I decided that I'd better find a campsite early - given all the Yellowstone tourists in the area. Third campground I checked had two sites left so I took one - Lake Creek campground, Shoshone National Forest.

Awoke to a low heavy overcast - nearby mountains were in the clouds. I had talked to the campground host - retired farmer from Cody, WY area - and he said the summer rains this year were unusual.

The plus side is that the grass is still green, the flowers are out, the streams are high.

Decided this was a good day to layover, read a book, catch up on writing this diary.