On July 26, 1998 I visited Gold Dredge #8 and took the tour. At that time it was owned by Holland American Tours which had fixed up the area (a National Historic Site) with signs, etc.

They tagged me on to the end of a bus tour after which I wandered around on my own on the dredge and to see some other exhibits.

Got to see a 10 minute movie on the history of gold dredging in the area then a guided tour of the well preserved dredge.

Alaska dredging was a little different than other areas because they had to deal with the "permanently" frozen ground.

They first cleared the overburden (soil, etc. on top of the gold bearing gravel) with drag scoops, then drove a pattern of pipes down into the gravel to bed rock.

They fed cold water down the pipes to melt the gravel beds.

Cold water worked as well as hot water and was much cheaper.

They built a canal to bring in the large quantities of water they needed - rivaled the Los Angeles Aqueduct in Owens Valley in engineering, cost, etc. and used some of the same engineers.

The dredge was built back east somewhere and shipped in pieces by train and boat to the dredge site where a pond was created and the dredge assembled. It consisted of three pontoons with the three story machinery structure, etc. on top. 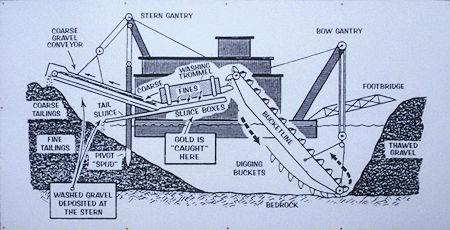 The dredge was anchored by two pivots driven vertically down to bedrock. The dredge turned back and forth right to left to right as it dredged the gravel.

When all the way to one side, the opposite side pivot was dropped and the other pivot raised. As the dredge pivoted to the other side, it effectively walked up the valley like a stiff legged man. Only moved about 4.5 miles true distance.

An interesting by-product of the dredging was finding Mammoth teeth and bones and tusks from various animals that died and were buried in the gravel. See pictures.

This dredge and others in the area were powered by land based electricity from a power plant in Fairbanks. Some of the power poles actually floated on small barges.

The same electric company still supplies power in Fairbanks. This dredge extracted millions of dollars in gold - 7.5 million ounces. It finally ceased operation in the 1950's. 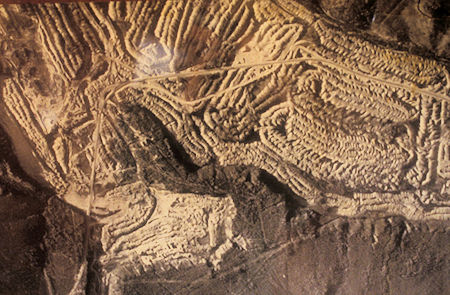 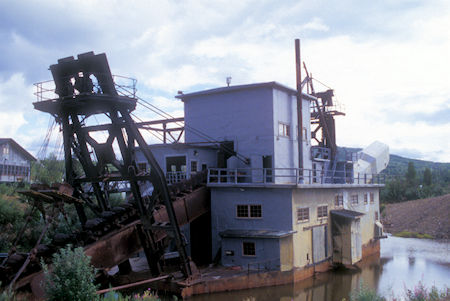 Dredge #8 - where ore was sifted to separate various sizes

Pan your own gold at the Dredge #8 exhibit

Short silent video of Dredge #8 taken by tourist in 2013


Originally a silent film by the U.S. Smelting and Mining Co. from 1949, KUAC added a sound track and narration in 1981 to explain the process and history of mining gold in Alaska's rugged conditions
Slide Show
Home
Gold Dredges
Home