On August 15, 1997 I visited the Mud Volcano Thermal Area which consists of strongly acidic mud pots and muddy hot springs. Some of them show intense boiling or even perpetual spouting, but true geyser activity hasn't been observed for decades.

Much suggests that both the insufficient stability of the ground and the low deposition rate of siliceous sinter interfere with the formation of long-term stable plumbing systems.

Dragon’s Mouth Spring boils out of a deep cave. Gasses and steam are released deep in the cave, creating pressure bubbles that explode against the roof of the cave. As this occurs, it creates a kind of booming and gurgling noise that is echoed through the cave and can be heard from the boardwalk.

The sound resembles the growling of an animal. Due to the high temperature of the water, large amounts of steam rise from the mouth of the cave, giving the impression of smoke billowing from the mouth of a dragon.

Prior to 1994 it was a rich green spring, sending considerable surges of hot water out of its dark cave, which leads 6 m (20 feet) deep into the hill. Unfortunately, both the surging activity and the temperature have decreased since then, but Dragon's Mouth Spring still remains a spectacular sight. 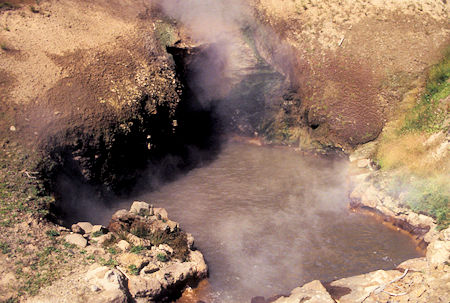 Dragon's Mouth Spring (it belches), Mud Volcano area, Yellowstone National Park
Mud Volcano: In the 19th century it was a mud spouting, volcano-like cone, hence the name. Probably a landslide, whose cause may have been a steam explosion, formed the current setting. Mud Volcano acts as a perpetual spouter and erodes the slope with its activity more and more.

Early visitors reported this as a 30 foot high cone erupting mud high enough to cover nearby trees. By the time the park was established in 1872 however, it had apparently blown itself apart and become a crater filled with bubbling mud, as it appears today 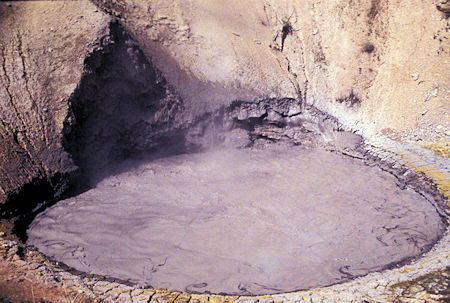 Mud Volcano, Mud Volcano area, Yellowstone National Park
Black Dragon's Caldron, is strong acidic pool. A heavy steam explosion in 1948 gave birth to the feature, tossing large trees and a lot of soil high into the air. The initial, vigorous spouting of hot mud more than 40 feet high calmed down over the years and the pool filled up with increasingly acidic water .

A strong, upwards directed current makes the position of the vent easily recognizable, but the initial expolsion took place in the northern part of the pool whereupon the vent gradually shifted southwards. Hence, the shape of the spring tells a lot about its history. 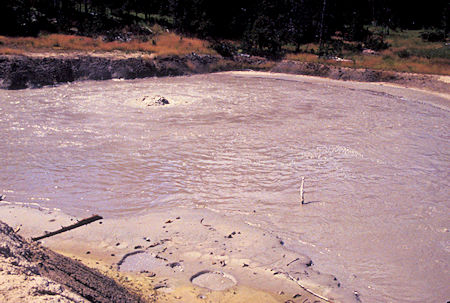 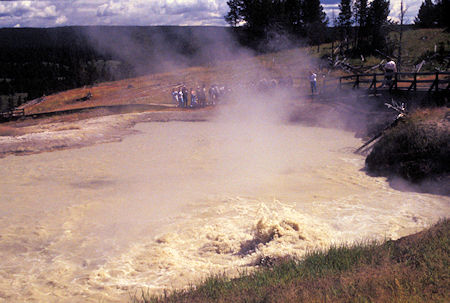 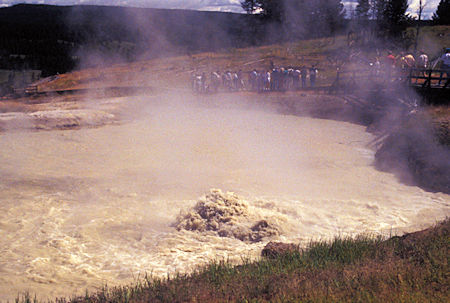 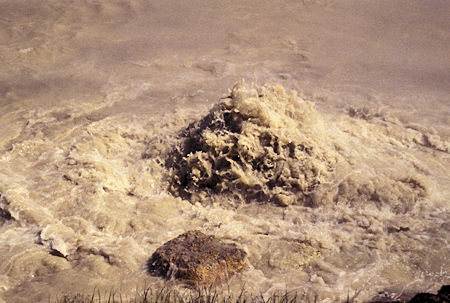 Churning Caldron, Mud Volcano area, Yellowstone National Park
Sour Lake, named for its acidic or "sour" water, may look like a pleasant swimming hole, but its water would burn your skin like battery acid. Most of its acid comes from microorganisms that create sulfuric acid as they consume sulfur. These microorganisms also give the lake its color.

Sour Lake is the largest pool in the Mud Volcano Group; warm, acidic and gently simmering 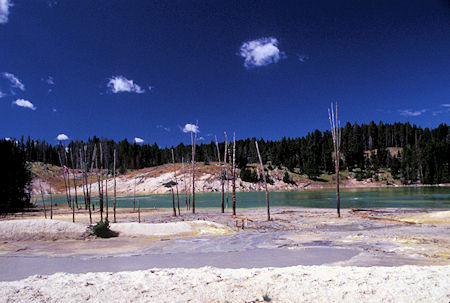 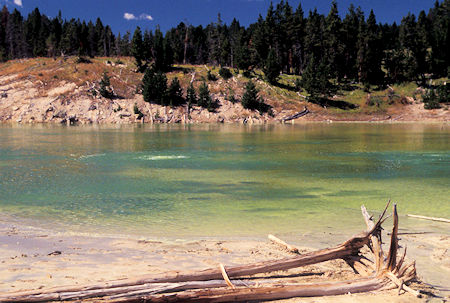 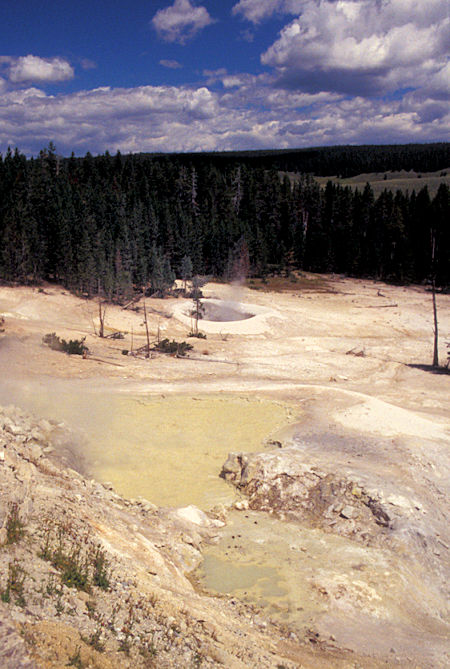 Sulphur Caldron, Mud Volcano area, Yellowstone National Park
Sulphur Caldron: The Sulphur Caldron is almost as acidic as battery acid, but is a pool of life all the same. Bacteria live within the ultra-hot waters, creating the colors you see.

In a temperature range between 131-183°F, Sulfolobus acidocaldarius, to the naked eye only recognizable as a grayish clouding of acidic hot springs, transforms (oxidizes) dissolved hydrogen sulfide into sulfuric acid.

This leads to an acidification of the spring up to pH 1, which is as strong as gastric acid.

Sulphur Caldron is most likely known since 1869 and was named in 1937.

The famous spring dried up in 2012, and the activity shifted to four new features on its southeast side.

It can be assumed that these features will merge over time and continue the name Sulphur Caldron. 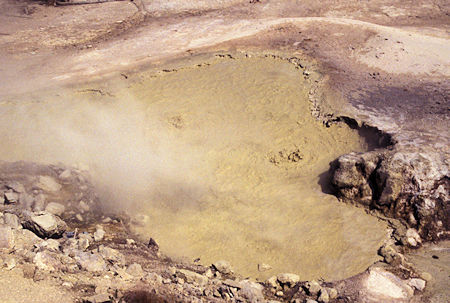