On August 11, 1997 I visited the Norris Geyser Basin which is the hottest, oldest, and most dynamic of Yellowstone's thermal areas. The highest temperature yet recorded in any geothermal area in Yellowstone was measured in a scientific drill hole at Norris: 459°F just 1,087 feet below the surface! There are very few thermal features at Norris under the boiling point (199°F at this elevation).

Norris shows evidence of having had thermal features for at least 115,000 years. The features in the basin change daily, with frequent disturbances from seismic activity and water fluctuations. The vast majority of the waters at Norris are acidic, including acid geysers which are very rare. Steamboat Geyser, the tallest geyser in the world at 300–400 feet and Echinus Geyser (pH 3.5 or so) are the most popular features.

The basin consists of two areas: Porcelain Basin and the Back Basin. Porcelain Basin is barren of trees and provides a sensory experience in sound, color, and smell; a 3/4-mile bare ground and boardwalk trail accesses this area. Back Basin is more heavily wooded with features scattered throughout the area. A 1.5-mile trail of boardwalks and bare ground encircles this part of the basin.

The area was named after Philetus W. Norris, the second superintendent of Yellowstone, who provided the first detailed information about the thermal features.

Norris Geyser Basin sits on the intersection of major faults. The Norris–Mammoth Corridor is a fault that runs from Norris north through Mammoth to the Gardiner, Montana, area. The Hebgen Lake fault runs from northwest of West Yellowstone, Montana, to Norris Geyser Basin. This fault experienced an earthquake in 1959 that measured 7.4 on the Richter scale (sources vary on exact magnitude between 7.1 and 7.8).

These two faults intersect with a ring fracture that resulted from the Yellowstone Caldera of 600,000 years ago. These faults are the primary reason that Norris Geyser Basin is so hot and dynamic. The Ragged Hills around parts of Back Basin are thermally altered glacial moraines. As glaciers receded, the underlying thermal features began to express themselves once again, melting remnants of the ice and causing masses of debris to be dumped. These debris piles were then altered by steam and hot water flowing through them.

Gibbon Falls lies on the caldera boundary as does Virginia Cascades. 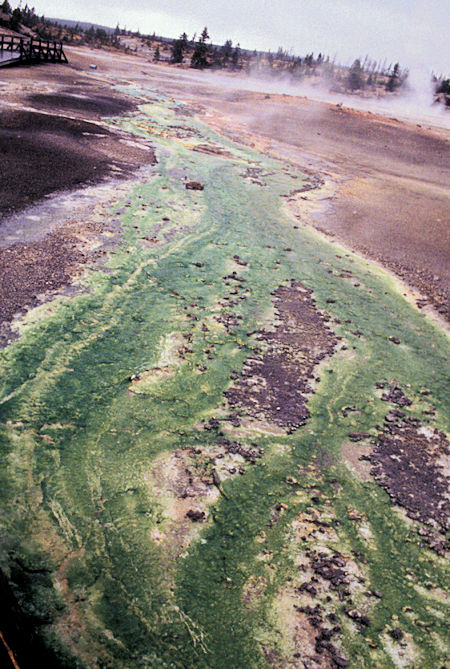