I arrived at Virginia City, Nevada in early afternoon. I parked at the south end of town next to the four story Fourth Ward School house. They had some desks with inkwells just like I had in grade school.

Spent about two hours walking around town. Downtown is pretty much a tourist trap but charges for museum's and such are either voluntary or not high. If you like to shop for trinkets, there are numerous opportunities. 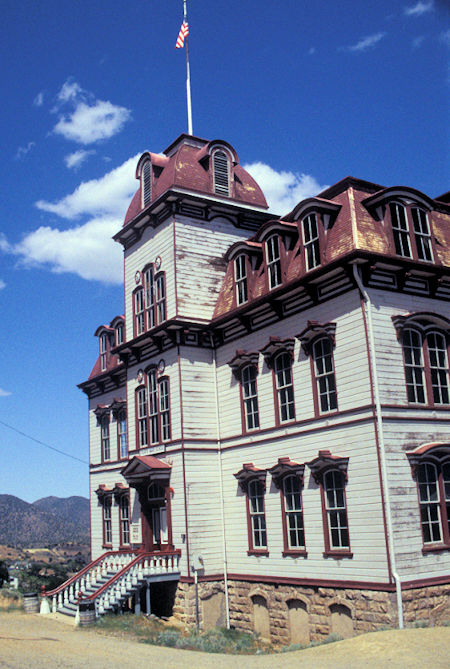 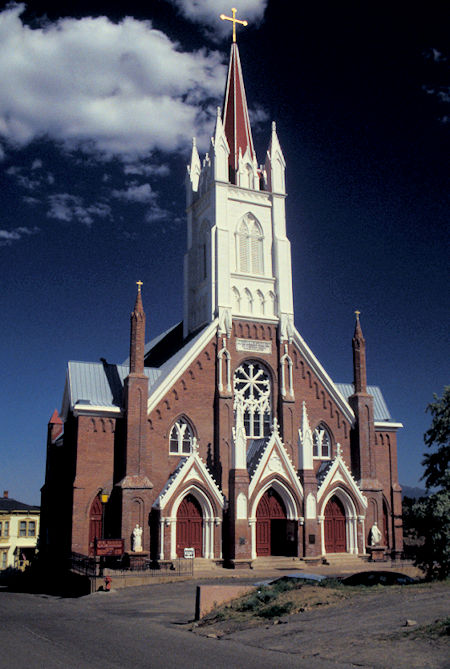 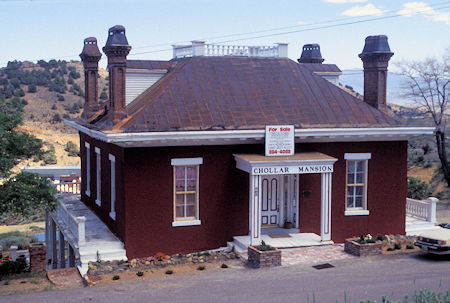 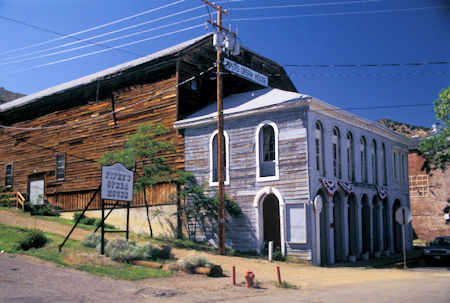 From Virginia City I continued north on U.S. 395 and spent the night in Forest Service dispersed camping area (i.e. I drove off the main road on an old unused logging trail.) on the Antelope Lake road near Janesville. 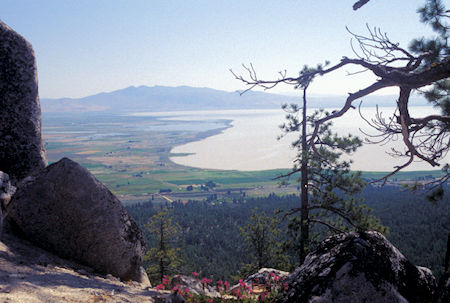 Continued to Alturas. Getting great gasoline mileage for the old tank, then over to Cedarville to check at the ranger station for South Warner Wilderness. Seems I was about two weeks early for my planned 40 mile loop trip. That's okay, my body wasn't ready for that anyway <grin>.

I was able to drive to the Pepperdine Campground, Modoc National Forest - free - outhouse and spring water system, free cut and split firewood. Part of the reason for this I think, was the fact that they have had trees dying and have cut them to keep from falling on tourists. Had the campground all to myself.

About half-hour after I arrived, a game warden showed up. We talked. He had been living in Swall Meadows above Bishop and working in that area until 1992 when he moved to this area.

Seems some unknown character had driven a trail machine into the South Warner Wilderness on the Pine Creek Trail. Also happens to be a game refuge. A hiker had seen the machine stuck in snow on the trail and video taped it and showed it to U.S. Forest Service and Fish & Game people.

The game warden had walked up to check it out, took pictures and tried to identify ownership. No plates on it. The VIN didn't show up as being registered. There was an empty rifle scabbard and a sleeping bag. Now they didn't know whether they had a kook or someone in trouble. 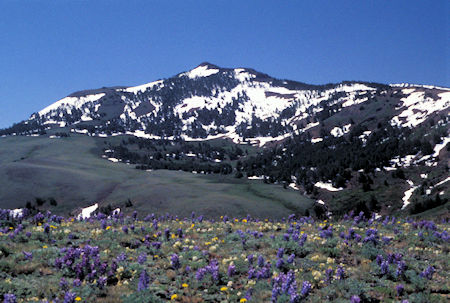 I did a 10 mile round trip day hike on the "Summit Trail" into the South Warner Wilderness. Some great scenery. I had some snow patches but all easily negotiated.

I got to within 1/4 mile of Cottonwood Lake when the snow got heavier and I was tired. If I'd had overnight gear I could have made it. Of course, the lake might have been frozen. 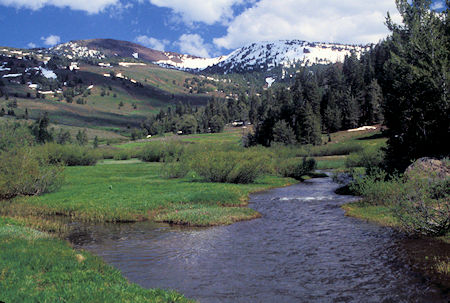 I drove into Alturas for supplies, then to the Pine Creek Trailhead.

Decided to take the four mile round trip hike to Pine Creek Basin.

Nothing spectacular, but a nice hike - grassy meadow and some small lakes.

Earlier in the day I had talked to a local from Alturas who had flown over the area the day before and he said Patterson Lake (larger than Cottonwood but nearby) was still frozen.

Saturday I was awakened at 5:30 a.m. by the melodious tones of a chain saw. They were doing salvage logging in the trailhead area. The logger apologize to me but said they had been told to get the trailhead area cleaned up before the regular season started.

In the morning I drove around to the Mill Creek Campground, hiked up to Mill Creek falls (a nice falls with a rainbow) then on up the trail to Clear Lake (not clear - lots of algae - typical lake turning into a meadow). Total hike under 2 miles round trip.

At this point I was suffering from either food poisoning or stomach flu. Headed for planned Lava Bed National Monument but I got to feeling worse and it was warm so I headed toward Medicine Lake in the forest instead and found a nice little used Modoc National Forest Campground at Payne Springs.

I was so out of it that I managed to back into a tree, pretty solidly. Wiped out the driver side tail lights, jammed the tail gate so it wouldn't open easily - decided not to force the issue - the window goes up and down. Also made the driver side second door tight fitting. I was so wiped out just spent the rest of the day sleeping.

Spent all day Sunday sleeping. Had no interest in anything. First I upchucked a few times, that seemed to help at the top end. Then it turned into loose bowels.

I finally got things together enough to drive to Klamath Falls, Oregon to see what I could get fixed on the car. Definitely need a legally functioned brake light/turn signal.

Checked into a motel for the night but they have a convention moving in so I will have to move Tuesday as well as check out the body shops, of which there are a number (Klamath Falls population about 17,000). Tonight I'm feeling better so hopefully the bug will go away, then I'll go to Lava Beds, etc.

Well, Tuesday was a day of warm fuzzies.

Warm Fuzzy number 1, Jim and Jean Gilbreath who were on their way to Washington State, chased me down via ham radio - turned out I was at a Quality Inn, not a Comfort Inn as I had said to them in an e-mail message. Their visit in aid of the battered <grin> was much appreciated.

Warm Fuzzy number 2. the first Auto Body shop that I stopped at turned out to be great people. I explained the desired result and my travel status. First response was next week. I didn't say anything, as I more or less expected that. He kept thinking, soon he was saying Thursday.

Then the sort of General Manager showed up, and started talking about maybe they could start this afternoon (Tuesday). Figured about 5-6 hours work plus some parts for the tail light. He immediately called junk yard where he thought he might get the tail light lens, etc.

I didn't even ask and he volunteered that the Cimarron Inn up the road about four stop lights was probably the cheapest in town. Seems a couple recently had "totaled" a car and had called every motel in town to find the cheapest and the Cimarron was it.

I checked into the Cimarron (probably would have anyway since it was the first one I came to). The check in gal asked me if I had AAA or AARP for a discount (Warm Fuzzy number 3) while I stood there with my thumb in my ear. Usually you have to ask about discounts or they don't volunteer the information.

Unloaded what I needed at the motel, returned to Ken's Body & Paint. At this point they still didn't know my name, etc. We got that into the computer and an estimate printed on paper, and the general manager drove me back to the motel in the company truck. Estimated completion sometime late Wednesday.

Around 9am Wednesday, he called to say the car would be ready by 11 a.m. if I wanted to checkout of the motel before checkout time. He would pick me up about 11 a.m. He was really looking after my interests. More Warm Fuzzies. I had decided to stay the night anyway, but the repair schedule still held.

He picked me up at 11:15. I paid the bill of $242.50 and was back in full service. I think it would have cost me more to have the work done in Bishop. There is a lot of competition in Klamath Falls. The bumper doesn't look like it was ever bent. The taillight hardly shows the condition it was in except they couldn't find real International lens's so they manufactured some out of other salvaged plastic - looks great. There are some small areas that would have taken a lot of time to completely fix but you have to look to see them. I'M A VERY HAPPY CAMPER.

If you ever need some body work in Klamath, go to Ken's Body and Paint. Spread the message to the world BY AIR, BY SEA, BY LAND. Real Nice People.

Interesting talking to the General Manager, Tony. After he and his wife completed college in the Chicago area (originally from Virginia) he had ended up in Los Angeles working as an insurance adjuster. After two years of LA they were ready to leave. A friend was offered an adjuster position in Klamath but wasn't interested so Tony landed the job. Said he sort of wanted to return to the mid-west, but they HAD to get out of LA and would try Klamath for a couple years. That was twenty-three years ago. They liked the rural atmosphere for raising their kids.

My other malady is getting better so I will leave Thursday morning for Lava Beds National Monument, then on to Shasta area and resume original "plan".

Decided to stay one more night at Klamath Falls to give my system time to come back to life. That was a good decision as I was able to walk all over Lava Beds the next two days.