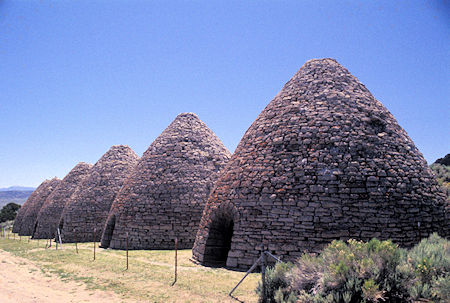 Departed Great Basin National Park and headed for Ely, NV with a quick side trip to the Ward Charcoal Ovens - a silver mining area.

Had lunch and bought some supplies at Ely, then headed west on US 80, then north on Nevada 278 to Carlin, NV, then east on I-80 to Elko, NV.

Had some highway construction waits along the way. Managed to sunburn my left arm and leg from sun coming through the chariot window. Saw some scenic country along with lots of lots of lots of. 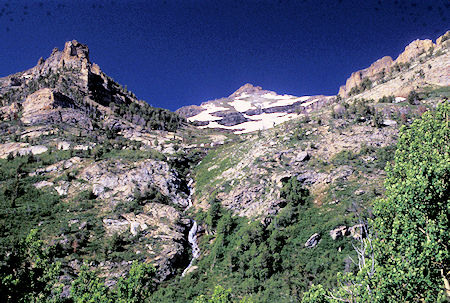 Took Nevada 227 south to the Lamoille Canyon Scenic area in the Ruby Mountains.

This is a trailhead area for the Ruby Mountains Wilderness.

I camped for the night at the Thomas Canyon Campground in the Humboldt-Toiyable National Forest.

Half of the campground was washed away in a 1995 flood and they are just now starting to get it reconstructed. Looks like an all summer " do it when we have time " project. 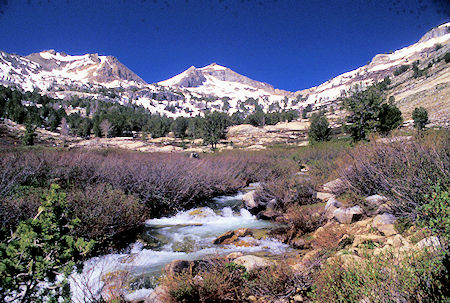 Drove up to the end of Lamoille Canyon. Very scenic canyon and this time of year numerous seeps and cascades and waterfalls were coming down the canyon walls.

A patch of snow on the road near the end at 8,800 feet. Hiked up the trail about 20 minutes - had to cross country to avoid snow on the trail. Willows were just beginning to bud. A place worth seeing.

Finally headed down the canyon. Passed what appeared to be a Search and Rescue Team practicing rock climbing stuff on a cliff along the road.

In Elko I had lunch, then headed north on Nevada 225 toward Mountain City, NV. About 55 miles north of Elko turned east on a dirt/gravel county road toward Jarbidge, NV - 57 miles.

This was a very smooth road and almost no traffic. Had to drive through a couple groups of cattle. 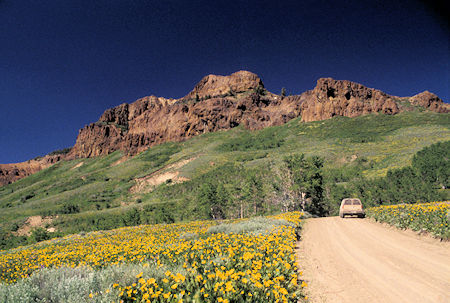 It got prettier and prettier as I drove. A surprising amount of wet green land and eventually a number of cattle ranches near a place called Charleston, NV which doesn't much exist anymore.

The road began to climb after Charleston and eventually topped the ridge on Coon Creek Summit at 8,400 feet. Many acres of yellow and purple flowers - mostly seemed to be like big sunflowers (but, learned later they have a name - which I can't remember).

There were still patches of snow on the hills and the snow capped Ruby Mountains and another range were in sight to the south.

Talked to two couples traveling the other direction. They lived in Reno but had skied this past winter at Mammoth and played golf in Bishop.

The road continued to Bear Creek Summit at 8,500' before dropping down into the Jarbidge River canyon near the Jarbidge Wilderness.

Passed a few snow banks that the road crew had cut through. Learned later that the road had just been opened for the summer on Monday. The gears held back the Chariot very well on the fairly steep downgrade.

Arrived at the Pine Creek Campground in the Humboldt-Toiyable National Forest along the Jarbidge River a few miles south of Jarbidge, Nevada at 4 p.m. Nice pleasant place.

This area is supposed to have some of the purest air in the country according to official monitoring stations.

Woke up and said to self - this would be a good day to do nothing. The road was supposed to go another mile and a half or so up the river so I decided to walk up that way.

Turned out the road had washed out two years ago (1995) and hadn't been restored. Learned later during the trip that apparently it will be restored eventually. And learned in 1999 that the Forest Service has decided not to restore it.

But, in early 2004 the final decision was still unresolved. Apparently because of this "argument" all of the Forest Service information about the area has disappeared off of the Internet (as of 7/5/2004 - nothing new found 10/27/2013).

So, I decided to walk down the road and check out some old mine building ruins I could see on the hillside.

I got to the buildings and the road was real good (could have driven it) and I figured it must end soon so lets see where it goes.

Two miles, a thousand or so feet and lots of sweat later, I was WAY up the hill and found a tunnel with tracks coming out of it - once had been a tram down to the buildings, plus more mines, plus a nice cool spring that I really enjoyed (since I had taken off without any of the 10 essentials - fortunately it was not too hot).

On the way down met a couple that were camped near me coming up the road on one of those four wheel trail bikes with big tires (ATV). Lots of those around this area. They had passed a spot in the road that had washed out and was only wide enough for a trail bike (not a full sized vehicle). They were from Logan, Utah.

Got back to the car for a late lunch, nap and some reading.

Since I had not done nothing yesterday, I did nothing today. My campsite was shaded all day and very comfortable. Checked out my plans for the next few days and read.

The campground host came by - they don't live in the campground like most hosts - live in a cabin at Jarbidge provided by the U.S. Forest Service - which is good since the number of campsites is limited. They were from Colorado. 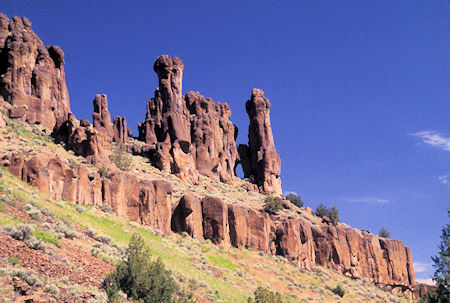 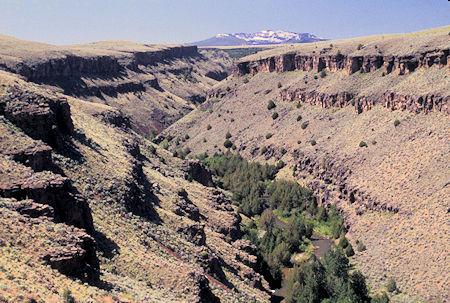 Packed up and headed down the Jarbidge River canyon. Passed through the small town of Jarbidge - an early mining town - site of the last stagecoach robbery in the United States.

It has turned into sort of a retirement town with a mix of old and new buildings. It's in Nevada, but because their only year-round access is via Idaho, they go by Mountain Time (same as Idaho).

Click here for some more information and a collection of photos.

The Jarbidge River canyon is quite scenic with some interesting rock formations.

Came to the confluence of two branches of the Jarbidge River and found a BLM recreation site setup for launching kayaks and I think rafts to float the Jarbidge River. Classified as fairly technical according to the sign.

There was lots of water in the river.

The road goes up the easterly branch which has cut a deep gorge in the countryside. The road tops out on the great plain of Idaho and soon becomes paved for the remaining 45 or so miles over to US 93. 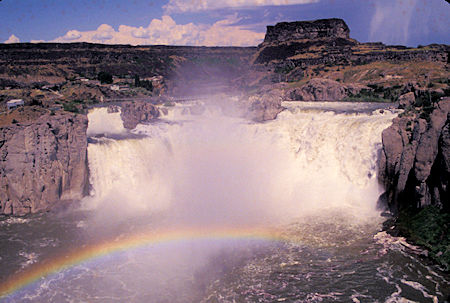 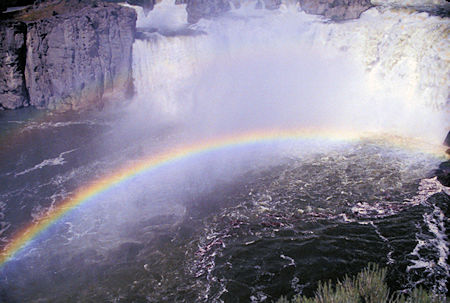 Proceeded north on US 93 to Twin Falls, ID and had lunch, gassed up the chariot (getting 17 mpg), and got a motel room.

Then drove to Shoshone Falls (212 feet high) on the Snake River. This falls is 52 feet higher than Niagara Falls and quite spectacular in the spring - like now. Later in the summer, irrigation diversions upstream reduce it to a trickle. It also had a large beautiful rainbow.

Very much worth seeing if you are here in the spring or early summer. Drought and irrigation affect flows .. I later learned that the peak flow rate was in 1997 -- 30,000 cubic feet per second flowed over the falls. So I really lucked out.

I then drove off westerly on US 30 through Buhl, ID and Hagerman, ID. Saw the "thousand springs" coming out of the canyon wall into the Snake.

It is believed that the water comes from the Lost River that disappears into the ground near Arco, ID - northeast of Craters of the Moon National Monument.

The area has seen numerous volcanic flows and the water is believed to follow lava tubes and such from where it disappears to where the water comes out in many places along the Snake River canyon between Buhl and Hagerman.

Also expected to visit Malad Gorge State Park (a unit of Thousand Springs State Park) but I was apparently looking in the wrong place and couldn't find it. Did see the Malad River where US 30 crosses it - very pretty and good sized.

By the way, Twin Falls is where Evel Knievel tried to jump the Snake River Canyon on a motorcycle back in 1974.