Departed Toms Place about 9:20 a.m., stopped for ice and gas in Mammoth and was on my way about 10 a.m., via Hawthorne, NV where I stopped to see the Mineral County Museum, but it was closed on Mondays. On to Fallon, NV and a visit to the Churchill County Museum. A very large and well arranged collection of local historical stuff. Well worth stopping to see.

North of Fallon I had about a 20 minute road construction delay, then continued on to Lovelock, NV and the Marzen House/Pershing County Museum. Interesting but not as worthwhile as the one in Fallon.

Continued on to Winnemucca, NV for supper and a motel - arrived about 5:30 p.m.

Weather was warm and sunny with nice fluffy clouds all day - very pleasant.

Departed Winnemucca, NV north on US 95 under blue sky with puffy clouds. As I proceeded up over a low pass, the clouds came down and first snowed a little, then rained a little. After a while it was back to blue sky and puffy white clouds - HURRAY!

Mostly just covering miles today. Arrived in McCall, ID late afternoon and drove out to the Brundage Ski Area (closed) and then on along the road toward Goose Lake. Just past a snowed in Grouse Campground the road was blocked by snow. Back tracked a little and drove on a narrow dirt road along the shore of Brundage Reservoir. It had patches of snow and mud so after a while I turned around, before I got 4-wheel drive STUCK!.

I headed for Roy and Carol Anne Wagner's place - I knew they were in Boise picking up friends from San Diego who were coming up to go on a five day river rafting trip so didn't expect them until late. Their daughter lives nearby and came to rescue me from my car when Carol Anne called to say they were going to be later than expected.

They soon arrived and we all got acquainted and enjoyed popcorn. It had snowed lightly that morning and was predicted to go below freezing again so we all helped cover plants outside with plastic, etc. Turned out that it didn't get below freezing during the night.

Continued north from the Wagner's on US 95. Crossed the 45th Parallel (½ way between the equator and north pole), was slightly delayed by a small cattle drive coming down the highway, enjoyed a beautiful drive down the Salmon River.

At Grangeville, turned east on SR 13, to US 12 - along the fine Clearwater River. The day started with blue sky and puffy clouds but kind of clouded up and sprinkled a little as I continued east along the beautiful Lochsa River to Lolo Pass where I had lunch. Continued on US 12 to US 93, stopping briefly at "Fort Fizzle" - a picnic area and sight of a fizzled encounter between US Army and Nez Perce Indians.

Was soon driving along the west side of giant Flathead Lake with many islands and inlets. Soon arrived at Kalispell, MT where I decided to take a motel instead of driving 40 more miles into Glacier National Park - saved that for Thursday. 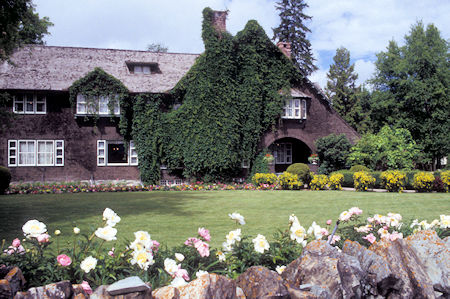 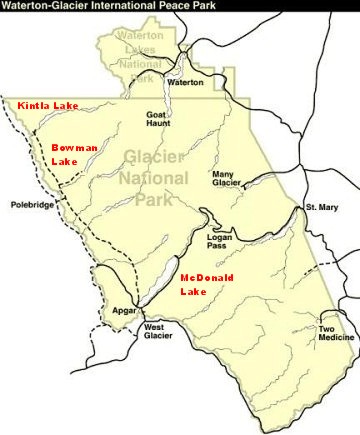 Awoke in Kalispell, MT to cloudy skies after some rain during the night.

Took a tour of the Conrad Mansion in Kalispell. Owned by the city and very well maintained (much better than the Daly Mansion in Hamilton, MT that the state owns). Build in 1895 and very modern for it's time. Had light fixtures both plumbed for gas and wired for electricity - he had his own power plant. The gas was seldom used. Had steam heat, running water, a hand driven freight elevator, very carefully architected. Not as fancy as the Daly Mansion, but still very impressive.

Conrad was in all sorts of businesses, entertained Theodore Roosevelt and other famous people, etc. The family never really moved out - just died off - the mansion was unoccupied for about ten years but a descendant lived on the property in a trailer and saved everything in the house - kept adding mementoes as she came across them. Very interesting place to visit - well worth the time.

Headed for Glacier National Park with a side trip to Hungry Horse Dam.

Started up the Going To The Sun Highway as the weather improved a little, but about noon it clouded up again and started to rain - showers. Stopped briefly at Logan Pass but the clouds were enveloping everything so headed on down the east side to the park's Rising Sun Campground for the night. 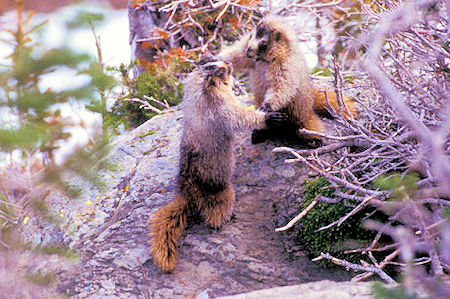 After I got to the campground Thursday, the weather cleared and even though it was cloudy in the morning, it looked like it might clear - so, I drove back up over Logan Pass, turned around partway down the west side and came back up, taking pictures as the sun poked through the clouds.

I got some cute Marmot pictures - several of them playing/mating - at one of the view points.

Headed back down the east side as the weather was clouding up again. Some real downpours fell off and on as I headed for Canada and Waterton Lake National Park. Big Chief Mountain - a major landmark - was hidden in the clouds. Glad I got to see it in 1997.

It was rainy at Waterton Lake National Park - glad I got to see it also in 1997. Exchanged some US money for Canadian and headed north to Pincher Creek, Alberta. Stopped to see their museum and heritage park. Interesting historical stuff but not a major attraction.

Drove outside of town to the Beauvais Lake Provincial Park Campground for the night. Got rained on some more.